Halloween has finally arrived and a fun time was had by all. Last night, Benton worked to cut out his Jack O’Lantern – a bat on top of a pumpkin. Carson was pretty concerned about getting his carved, so we made it happen this morning before school. His is a bat. Here is what they looked like after dark on Halloween night. 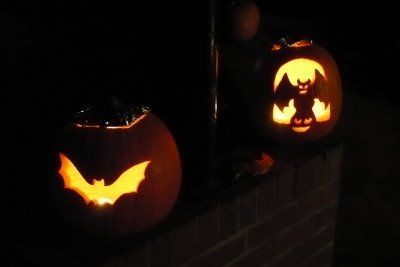 Benton and Carson had Harvest Festival activities at school this afternoon. This is basically a costume parade around the outside of the school followed by various fun activities inside the classroom. The parade started at 2:15 and everyone was finished with the classroom parties by 3:30pm.

Here is Carson during the parade. My little Ninja is walking with his friend, Tom Cat (a.k.a. Jack). Alana and I were along the parade route, which was sunny and relatively warm (in the mid-60’s). 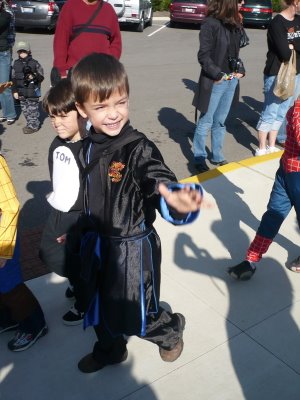 Here is Benton in his classroom, digging into a bowl of “brains” (spaghetti) in search of rats, eyeballs, and spiderwebs. This was a rather slimy but fun activity. 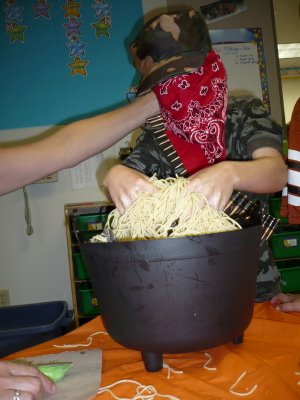 Other activities for the classes included cookie decorating, bean bag tosses, mazes, bingo, and limbo, just to name some of the ones I got to see. Benton’s teacher (Cinderella with long white gloves on) finally gave in to the pestering from the kids and dug into the brains. It was fun to watch her AND watch the kids be entertained by their teacher doing this slimy thing. Of course, with her gloves removed and long nails digging in, she got to enjoy the “brains” a little longer than the kids, as it got all stuffed under the nails.

After school, we came home and played until our friends, the Hannan’s showed up for a quick dinner and some trick or treating, which was scheduled from 6-8pm. With their 3 kids and a friend, and our 3 kids, we had a troupe of 7 trick or treaters hitting the street. 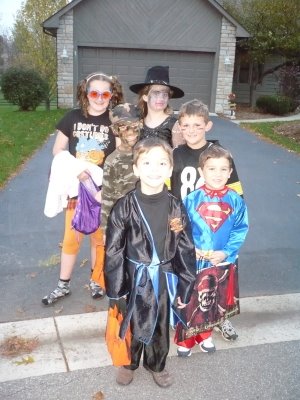 Alana was a little slower than the rest, but didn’t seem to mind hitting every other house or so…. in the beginning. About 30 minutes into the trick or treating, she realized that she wanted to go to all the houses she saw the other kids at, so Tim provided much needed transportation between houses for her. She lasted about an hour and got her “chariot” to take her home to bed while I continued along with the boys. 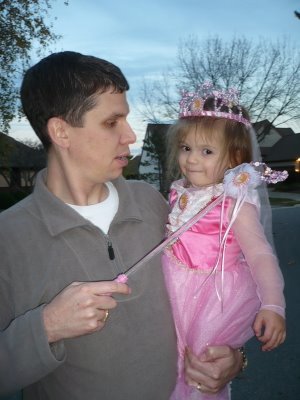 By 7:30pm, the boys were ready to come home and count their booty. Here is a picture of Carson with his lot (and Benton’s ziplok bag of candy). He sorted his candy in order to fill out a graph he was assigned to do from school. My estimate is that between the two boys and Alana, we gained 4+ pounds of candy!!! The pounds and pounds of candy I bought to hand out were about the right amount, with just a handful or two leftover. Despite Carson’s extra large collection of candy, he still tried to “borrow” candy from Alana’s bag and the extra candy we had leftover. 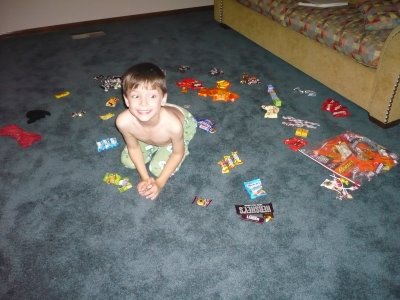 Thankfully, the school district planned a 2 hour late start day for tomorrow, which means Benton won’t have to be at school until 11:00am and Carson won’t arrive until 2:00pm. We will be off to the farm over the weekend and can hopefully run off some of this extra sugar!