Tetherball: An All Weather Sport

You may recall my tetherball set installation woes. I put off trying to come up with a solution to the dilemma long enough that my parents made it to town, and my dad applied some engineering problem-solving to come up with a reasonably stable solution (a length of PVC pipe with a lengthwise cut in it and a handful of band clamps — ingenious, really).

The weather dipped into the teens during the day shortly after the installation was complete, but that didn’t stop Benton from pestering anyone and everyone into bundling up and playing a few games with him. We found out later that my dad — the most obliging grandfather EVER — managed to tweak his knee a bit, to the point that it was still bothering him a week or two later (and hindering my folks’ cross country skiing plans in Maine)!

Unfortunately, the photos of those rounds are forever lost with the camera that disappeared. But, shortly after the new camera arrived, Benton’s friend, Josh, came over for a Friday night sleepover. On Saturday, in 35 degree weather, they headed out to play: 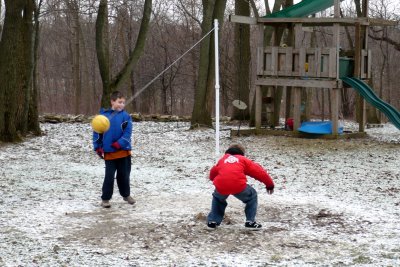 After 45 minutes or so, they decided they were getting too warm, so they stripped down (Longhorn jerseys both! Hook ’em!): 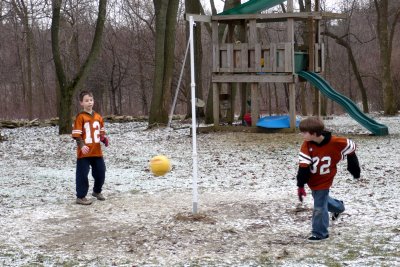 But, the ground was still frozen, which, apparently, added to the challenge: 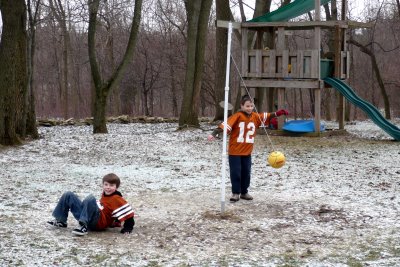