We’ve had yucky-but-not-really-miserable weather for the past few days — a mix of rain and snow, with temperatures drifting back and forth around freezing. In short — not enough snow to make for good sledding, too much wetness to make it pleasant to be outside, and just enough freezing to make it less than advisable to drive around too much.

Earlier today, Carson showed up with three calculators and a book of calculator “tricks” — riddles and jokes that you read, then punch in an equation, and then turn the calculator upside down to read the punchline. Of the three calculators he had, two were large format calculators, and one of those didn’t work at all. As he was punching in formulas on one of the functioning calculators, I took the back off the broken calculator to see if there was a battery that could be replaced. Instead, I found that the main circuit board, which attached to both the keypad and the LCD screen with some sort of conductive plastic, was totally detached on both sides. There really was no hope of reconnecting it. Carson quickly tired of the calculator riddles and drifted off to play with Legos.

I asked Benton if we should take the broken calculator apart.

He was pretty bored after being stuck inside for the weekend thanks to the weather.. We commenced with our disassembly.

We got the LCD screen completely removed. We tried connecting the battery from the calculator to various contacts…and nothing happened. We found that, at times, if we ran our fingers over the contacts, some of the screen would turn on. Benton hypothesized that a magnet would make the particles align and “turn on” some of the elements, so he ran off to get one. No luck with that, either.

My attention span was sufficiently exhausted, so I wandered off.

A couple of hours later, Benton tracked me down. He had the LCD display: 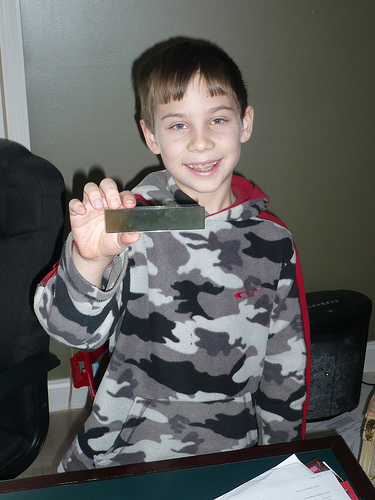 He had a balloon: 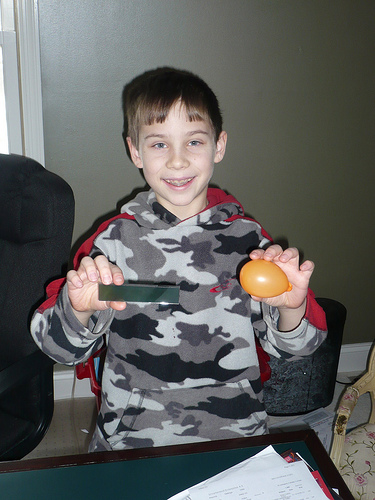 He showed me that he could rub the balloon on his hair: 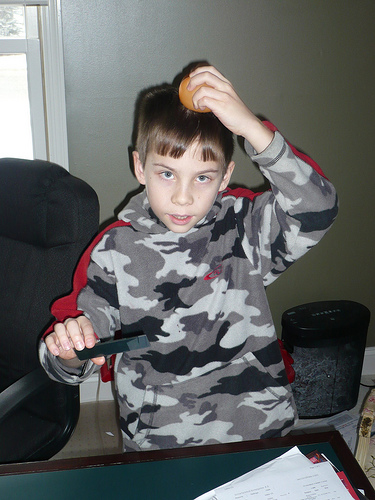 And then touch the balloon to the contacts on the LCD, and it would consistently light up the elements (trust me, that’s what happened — the photo just doesn’t capture it): 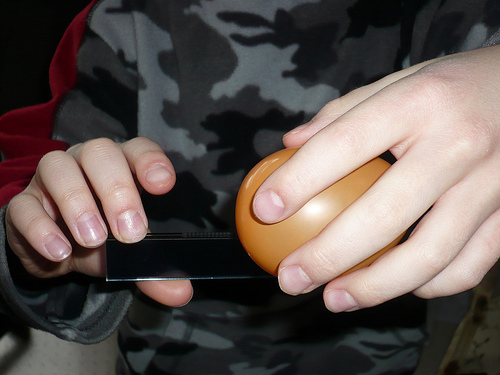 He’s not done yet, as he’s figured out ways to get one side of the display or the other to light up. And, he’s now trying to figure out how to selectively turn off different pieces, and how to explain that there are way fewer contacts going into the display than the number of unique elements that can be turned on or off.

I, for one, think that calculator, which we’ve had for several years, got more use in pieces than it did in its entire life as a functioning math machine!