The First Trip to “The Farm” Since We Moved to Ohio

Depending on how early you started following the Wilson Migration of 2007, you may or may not know that: 1) The beginnings of the move happened at Bob’s farm in West Virginia over the holidays, and 2) being within long-weekend distance of said farm was a big draw of Columbus.

Labor Day weekend marked our first visit to the farm as Ohio residents (Julie, obviously, made many trips as an Ohio resident in her youth).

Due to Picasa’s and/or Blogger’s limitations, I can only get four images at a time directly from Picasa to a blog entry. This is a good way to keep me from posting an entire photo album, which I will do at some point via Shutterfly . So, the first four pics are an attempt to be a representative sample of some of the highlights.

First off, Alana’s absolute and unwavering adoration of her cousin, Tyler, has not wavered one whit since she stayed with him in Wadsworth during the move. She did a very convincing imitation of a puppy dog — following him around constantly and trying desperately to be involved with anything he was doing. Tyler is a real sport, and he genuinely seems to enjoy his status as Alana’s idol. He played catch with her, let her try to tackle him, gave her hugs, and generally accomodated her every whim to the same degree that her grandparents do. 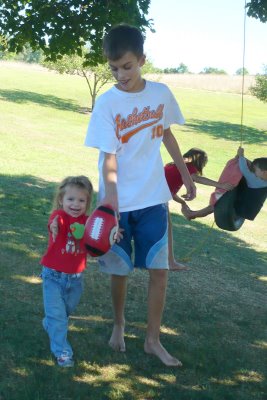 The potato gun that Tim built on the farm over Christmas now has a permanent home there. In the picture below, Tyler held the gun while Carson fired the igniter. Carson was pretty tickled with himself that he was able to twist the lighting flint fast enough to get a good spark and launch the potato. If you are in possession of a y-chromosome and have never experienced a potato gun (aka, a spud gun), you are missing out. There are all sorts of designs out there, but the only I’ve ever seen/used uses hairspray as the propellant. The design we used is out of a book called Backyard Ballistics , which I highly recommend (we also attempted to launch some Cincinnati Fire Kites…but the weather was just a bit too warm for them to really work). 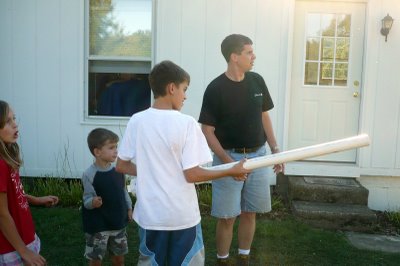 And, what would the farm be without fire? Benton continued his daily ritual of heading out to stoke the coals from the prior night into a roaring flame. Fortunately, I’d ordered a replacement hand-crank blower in time for the trip. 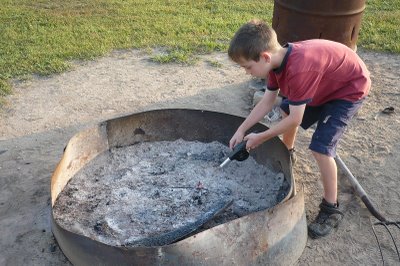 Meg was a close second to Tyler when it came to Alana’s affections. We spent a couple of hours down at the river on Sunday, netting crawfish and minnows. Alana attached herself to Meg (and Meg’s water shoes). And, Meg obliged her by helping her catch various critters. 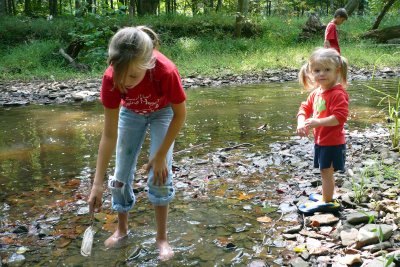 I’ll cover the two big adventures/events of the weekend in the next post.