Wednesday night is swim lesson time for all three kids. It is a night that requires advanced planning as dinner needs to be early, towels and PJ’s packed up, and bathing suits put on. In my attempt to make sure we were not late, I had Alana head up to get her bathing suit on early. This worked great — swim diaper on, bathing suit on, sweats pants on…. more or less ready to go. What I did not anticipate was that the extra time would allow Alana to decide that she needed to squeeze pink striped tights over her sweat pants before putting on her boots when it was time to leave. Apparently, socks would not do. This made for an interesting outfit when the sweat pants got bunched up above her knees, making them look a little like football pads.

Here is the fashion diva in her “football” pants. 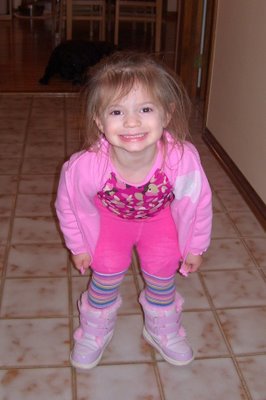 Alana and I had a conversation on Monday about sports. We talked about Carson’s Tae Kwon Do class and also about baseball. Alana then announced to me that when she gets bigger, she is going to play football. Given that she likes to play a tackling-like game with Carson that they aptly call “Take Down,” I suppose football would be something she might like. I just don’t think the team will go for pink uniforms.