But…the floor is so HARD!!!

The dogs hit the kennel (well “The Pet Palace” — overpriced with needless luxuries…but that’s just my opinion) for a couple of days over Thanksgiving. To express their frustration (Julie would say, “Due to the stress…”) they managed to pee on their doggy bed. Yes…we take their doggy bed with them, because that will make them feel more at home at The Pet Palace. Apparently.

We weren’t sure how to clean the bed itself, and it was pretty saturated, so the cover went in the wash and the bed went outside. That meant Elwyn was without a bed on Saturday night.

Now, Elwyn can screw up a truly pained expression when he stands up, takes the step down to get out of the house into the backyard, or gets in or out of the minivan. He’s never seen the second floor of our house (where both dogs are banned, anyway, but, in his case, it’s an impossibility), and he’s only semi-fallen down the stairs to the basement a couple of times…only to have to be carried back up. He’s thirteen years old, so all of that is understandable. 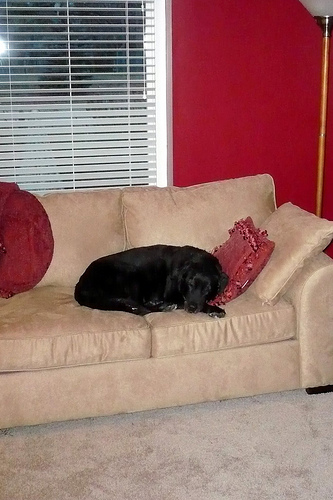 The dogs aren’t allowed on the furniture. There’s not even an “if invited up” rule (or, at least, there hasn’t been since well before we moved to Ohio). When busted, Elwyn simply tried to pass it off with a ho-hum, of-course-I’m-sleeping-here-I-assumed-that’s-what-you-wanted-since-I-don’t-have-a-doggy-bed-right-now-and-you-can’t-expect-me-to-sleep-on-the-floor-all-night-even-though-I-take-fifteen-naps-a-day-there expression.