I’ve been a University of Texas baseball fan for several years, but my general Longhorn-ness has definitely intensified since we moved to Ohio. I’m not anti-Buckeye by any means. As I told people both here and in Austin after we moved, I can root for Texas first, the Big 12 second, Ohio State third, and the Big Ten fourth and very seldom run into any real dilemmas.

Just over a year later, Texas is going up against Ohio State for the third time ever…and the other two times were within the past four years (Texas won in Columbus and went on to win the national championship in 2005; the following year, Ohio State won in Austin and went on to, well, get thumped by Florida in the national championship game in 2006). That almost makes today’s Fiesta Bowl the rubber game in a three-game series. That puts me testing my priorities…and they’re coming through exactly as planned. GO HORNS!!!

I’m decked out for work today in a burnt orange dress shirt with a Longhorn tie, courtesy of my parents for Christmas. Alana is wearing her UT cheerleading outfit, also courtesy of my parents. I’d eyed these outfits on numerous times during trips to Austin, and just couldn’t bring myself to buy such gender-stereotyping garb. But, my goodness, she is cute, isn’t she?! 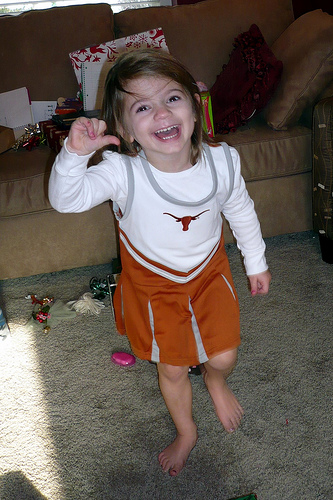 I have no idea who will win tonight’s game. I’m hoping to get to watch at least part of it with the Longhorns who live several houses down from us, but that may or may not happen. It will be fun to have won “the series” come tomorrow morning. But, honestly, it won’t be entirely unenjoyable to be the butt of any jokes from my co-workers tomorrow morning if Texas winds up losing. The truth is, college football is really just a way to while away the months before baseball season starts, which is February 20th for Texas.