…and he wound up with four stitches in his head.

I realized I forgot to mention that Benton got his braces off last week. Julie captured the result with her Blackberry: 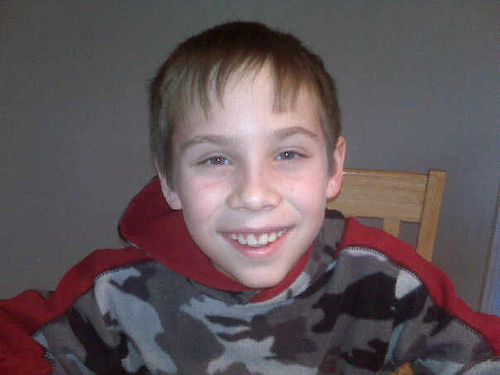 And, today was the Glacier Ridge Elementary Spring Meltdown — an indoor carnival/fundraiser at the boys’ school. Julie took Benton and Carson with her when she went to volunteer for the first shift of the day. Alana and I headed to Buffalo Wild Wings for a father-daughter lunch and then headed to the event. Alana remembered the experience last year, and demanded that the first thing we do was that she get her face painted with a butterfly. The result (again captured with Julie’s Blackberry): 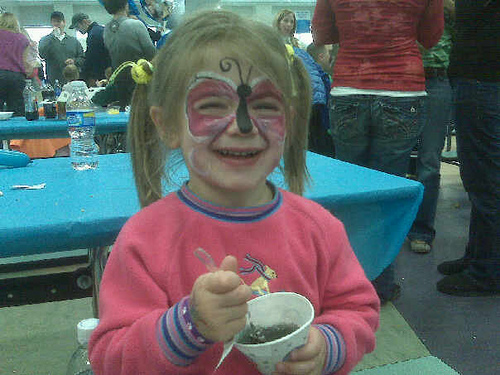 Benton’s friend, Hunter, came home from the carnival with Julie and the kids to spend the night. Five hours of high activity for our kids is generally a recipe for disaster. And…it was.

Julie brought home an extra kid, but offset that by leaving Carson’s coat at the carnival, so she headed back to the school to retrieve it. She plopped Alana down in front of a TV to give her some down time. I was upstairs working on some United Way stuff. The boys were in the basement. It took all of 10 minutes for Benton to come racing upstairs screaming bloody murder about how Carson had thrown a plastic Nerf gun at him and hit him in the head. In and of itself, not all that surprising…but this was a real injury. He had a pretty nasty gash in the back of his noggin. We got some direct pressure applied with a sterile pad, and I got him sitting down with his head down, as he was feeling somewhat woozy. Julie made it back home and ran him up to the urgent care place…and he wound up with four stitches in his head. This was Benton with his head temporarily wrapped while they waited for the Lydocaine to kick in: 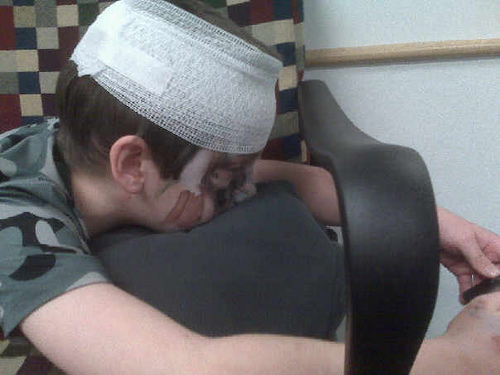 Julie’s observation was that, if you added up the ages of all three of our kids, you’d have 21 years of total age…and this was the first need for stitches!