I described in a post last week that our cul de sac is getting into the habit of congregating around a fire pit on weekend evenings when the weather is nice.

This last Friday was shaping up to be a little dicey weather-wise, but Thursday evening was gorgeous, so Julie shot a note out to our cul de sac’s Facebook group on Friday morning to see what people thought. By the time I got home, she announced that it looked like it would be more than just the Wilsons, but not much more, as several of the other families had conflicting plans for the evening.

Well, somehow, by the end of the night, I’d counted fourteen kids and eight adults — several families’ plans got fortuitously adjusted. And, since I had a camera in my pocket from photographing Alana sans training wheels earlier in the evening, I snapped some pictures over the five or so hours the evening lasted.

As Benton and I discussed whether we’d eat the pizza inside or out, we settled on out, as he’d already gotten the fire going. Hearing this, Alana immediately grabbed her table and hauled it from the front porch out into the driveway so she would have a table at which to sit and eat with the girls o’ the ‘hood (from left to right: Caroline, Gabby, Sadie, Alana): 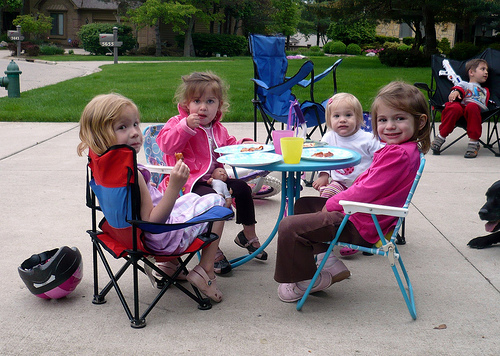 Properly fortified, and riding high from their recent mastery of training-wheel-free bike riding, Caroline and Alana then headed up a tree (there was a brief moment where it looked like Alana might have “pulled a cat” and managed to get up without being able to get down, but she figured it out pretty quickly): 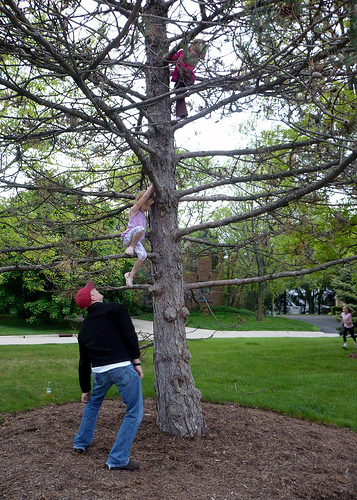 Convinced that Caroline’s dad, Chris, was ready to play fireman and catch any tumbling kiddos, I turned around and snapped a shot of our driveway — fairly common set-up, although the adults are typically able to sit down and converse more than this picture is showing: 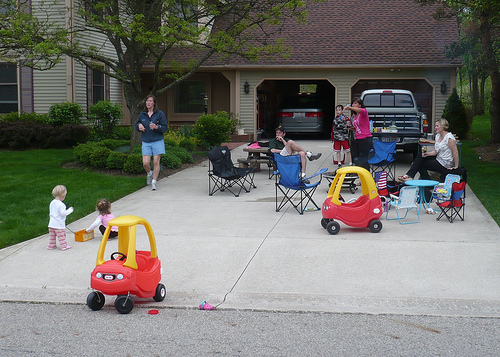 At some point, the conversation turned to golf…and then to illuminated golf balls…and then to Chris going to grab his pitching wedge to see what it was like to hit one of those balls. That turned into three of us taking turns hitting the ball. After one hit a piece, we realized that, with 12 kids roaming the area (at the time), a change in tactics was needed. Bill went and grabbed his indoor/outdoor pitching set that has softer (safer) balls, shown here (note Alana has returned to her bike at far left): 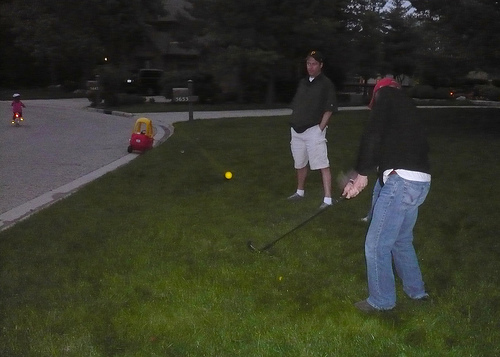 Shortly after this picture was taken, we had the one accident of the evening, when Caroline and Allison collided on their bikes. I know, I know — you want to know where the picture of that is, but I’m not the type of photojournalist who preys on calamity. And it wasn’t all that calamitous, anyway.

A bit later, the rains did come. They built from a light mist to a steady drizzle. Rather than calling it a night, we headed across the street to the Yapp’s screened porch. Some more neighbors showed up (their conflict had been a school play). For chuckles, we glued Gabby to the ceiling: 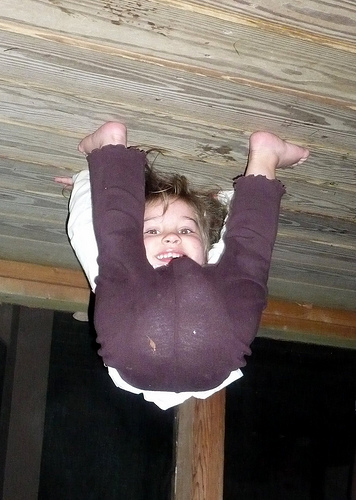 Well…not exactly. Gabby ultimately fell asleep in her mother’s arms, but not before she got a little punch drunk and started viewing the world through her legs. Properly orienting the photo: 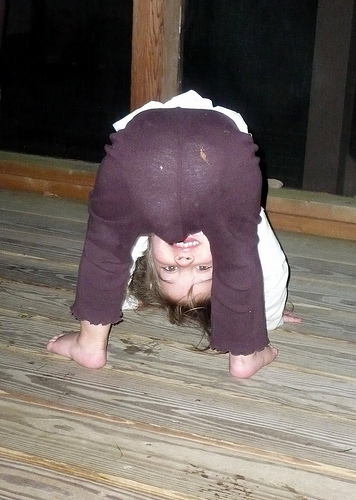 After the rain stopped, we did get the lighted golf balls back out, and five of us (three adults, Benton, and the 13-year-old who arrived late after being in the school play) played a little game of night chipping.

All in all, it was a darn enjoyable evening. And two of the regulars families-wise weren’t even there!