One Anecdote on the Awesomeness of College Baseball

This should be my last Longhorn baseball post recapping our trips of the past few weeks, but there was a story worth sharing from Sunday’s game against the Kansas Jayhawks.

A Longhorn batter — I think it was Kevin Lusson, but I’m honestly not sure exactly who it was — came up to bat early in the game. Early in the count, he got out way ahead of pitch and sent a hard foul shot straight at the 3rd base dugout, where the Kansas players stood watching. The ball hit a player — it wasn’t clear if it hit him in the face, the arm, or the hand, but he fell backwards, and there were a few minutes of serious concern about his well-being. Luckily, he got checked out and was okay, for which he got a nice round of applause from the crowd.

Near-miss serious injuries aren’t awesome at all, but that incident set up some antics later in the game that had everyone — fans and players on both teams — chuckling.

The next time the same batter came to the plate, the entire Kansas team quietly donned their batting helmets — a mock self-defense maneuver. As fans started to notice, the word spread, and everyone had a good laugh. As it happened, the batter again hit a foul ball straight at their dugout (that is not at all a “typical” foul direction for a right-handed batter), which made everyone laugh (even the batter shook his head and grinned). He promptly then hit a single into right field.

The fact is, major league baseball players are in a grind and they’re under incredible pressure to perform. Many of them don’t have many options besides professional baseball to earn a living, and they are keenly aware of how tenuous their position at the top of the game is. There isn’t much laughter in a major league dugout.

NCAA Division I baseball schools get 12 scholarships total for baseball. Because of the need for a multitude of pitchers, as well as some level of depth, it’s common for teams to have more than 30 players on their rosters. That means that either many players on the team have no scholarship, or that most players receive only partial scholarships, depending on how the school decides to parse out the scarce resource. Because of that, the players, by and large, are playing both with a genuine love of the game as well as a keen awareness of how long the odds are that they’ll ever make it to the big leagues.

College baseball players don’t take the game too seriously, in my experience. They recognize that it’s a game, they’re used to hours of tedium during travel and, to a certain extent, during the game (at most, there are only 9 players on the field at a time, and even that’s only for half of the game!).

There was no malice in the stunt the Kansas team pulled — they were being funny, and their humor was widely appreciated.

Of course, I’ve had the good fortune to follow a team coached by the winningest coach in college baseball history — Augie Garrido. From interviews I’ve heard and what I’ve read, Augie drives home a healthy perspective with his players. I like to say that, when Augie calls an offensive timeout to have a few words with his batter, the other team might as well pack up and head home. I don’t know what he says (I’m sure it varies widely depending on the player and the situation), but it’s fun to watch what happens after the chat: 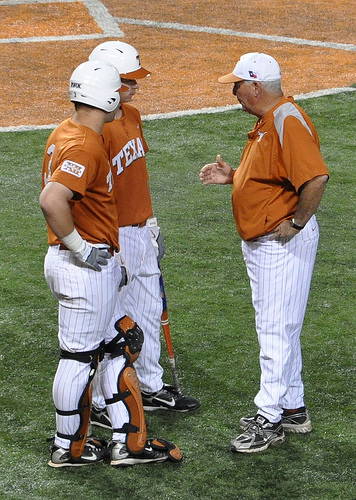 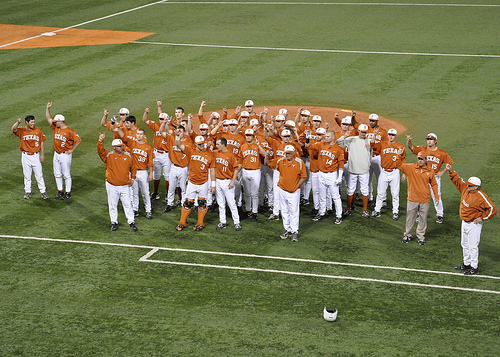