The Whole Clan Hits the Slopes

One of the big Christmas gifts we got this year was “once a week” passes to the local ski slopes, as well as some lessons. Benton, Carson, and Julie skied once last year, but Alana had never skied, and I hadn’t skied since the early 1990s (and that was a one-week ski trip in Vermont — the only time I’ve ever snow skied). Luckily for me, skiing technology has advanced at a slightly faster rate than the decline of my gross motor skills and coordination. Benton, Carson, and I took a one-hour lesson, Alana took a 2-hour lesson, and we swapped around adults for the day to ski with (well, well behind, in Carson’s case) the kids.

(The pictures below were taken using one of our ultracompact Panasonic DMC-FX10 cameras. It wasn’t practical to take along the DSLR.)

Benton and Carson Preparing for a Run
(It was an absolutely gorgeous, sunny day — compare the lack of bundling in this photo to the photo in the link earlier in this post) 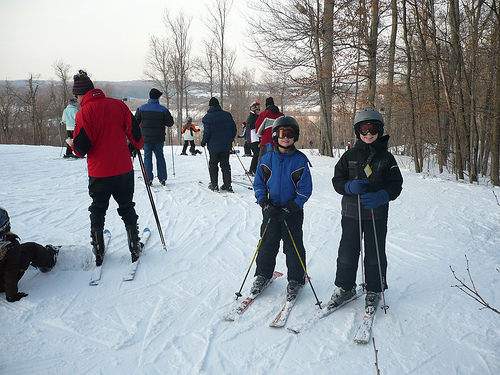 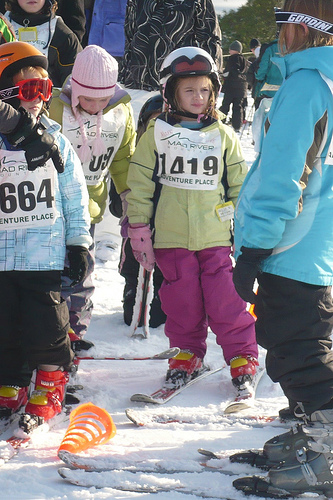 The runs Alana could handle were “Bunny Hill” and “Fanny Hill.” The former used a conveyor belt to ferry skiers to the top (that’s actually all the people to the right in the photo below), and the latter used a tow rope. The tow rope was a little tricky, and Alana never really mastered her exits. What’s impressive (be impressed people!) is that, for the shot below, the photographer (moi), had to hold onto the tow rope crossbar while being pulled up the slope and hold onto two ski poles and remove a glove (and hold onto it) and extract a small camera from a zippered camera case inside a zippered coat pocket and take the shot. No equipment was harmed or lost in the taking of this picture. 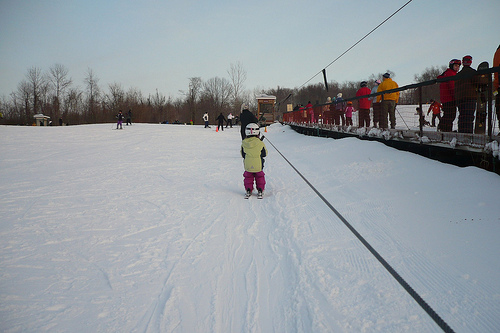 Ready for a run down Bunny Hill 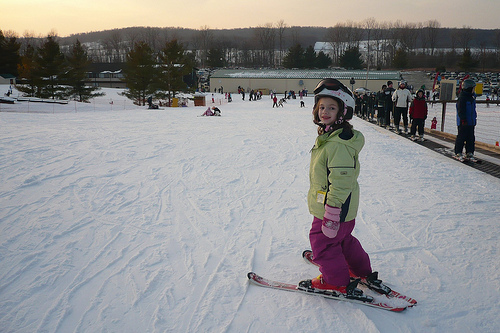 After a half-dozen runs, I took my skis off and just helped Alana through the line and onto the conveyor to head up Bunny Hill. By the time of this run, the sun had set and the lights were on. That’s Alana 3/4 of the way through a solo run down the hill. 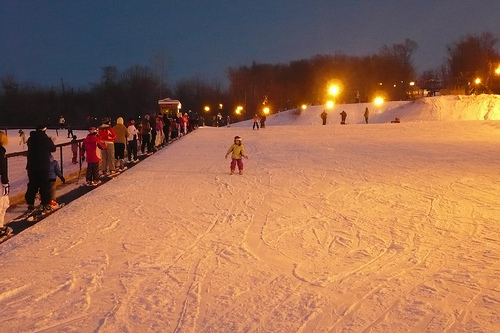 All kids were still raring for more when we headed home after ~8 hours at the facility, so it was definitely a hit.