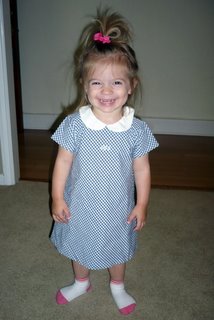 I’ve been waiting for this day. Really, I have. Ever since we set the wheels in motion on this whole relocation to Ohio, things have gone pretty darn smoothly. Almost toooooo smoothly <cue Twilight Zonemusic>. First, it was really easy for me to enter the job market. Without too much wait and without too much legwork, I had multiple job possibilities. I had a fairly easy decision when it came to which job to take. My former company was very supportive of my decision as well (not so supportive, though, as to make me think they’d actually been hoping I would leave!). Julie tackled prepping the house to put it on the market early and stayed with it steadily. Once it went on the market, it was under contract inside two weeks. And, if you read the last post, even our house-shopping trip to Columbus went well, in that we wound up with two almost-equally-attractive houses.

The first house didn’t work out, but we entered negotiations on the second one, and things were moving right along.

Until Julie found some time to get online.

And do some additional research.

The school district the house is in was number 2 on her list of 4 good districts. She’d nudged Dublin, OH up to number 1 on her list after driving around the community.

What did she find out today, then? Well, somewhere, she found out that the elementary school that Benton and Carson would be attending is overcrowded. Consequently, any kids who move into the area after March 7, 2007 will be bused to another school. Same great district, just not the same school that, potentially, other kids on the same street would be going to. This is (apparently) a BIG DEAL.

After Julie let me know this was the case (in the middle of probably my most hectic day since I’ve been at my current job), I had a flash. Why, everything was going to be okay. It struck me that, had we stayed in Austin in our current house, we’d be in the exact same situation! Based on all of the research Julie did before Benton started first grade, she’d decided that he would be better off attending a different school in the district than the one that is closest to our house. So, for the past two years, he’s been bused (by me) to that school. And Carson was slated to join him next year. So, this new news wasn’t a big deal at all!

Stay tuned. We’re slated to discuss it this evening. Which started about 5 minutes ago when Benton went to bed.

I do believe the shoe may be dropping (and THAT, dear reader, is the connection to the picture of Alana above — notice that she is wearing no shoes!).