Julie takes more of a semi-regular newsletter approach to providing updates. For those of you who are reading this because you received one of her updates…this post is a repeat of that information verbatim.

A good deal of chaos has ensued here in Austin, but we seem to have a breather in the moving process, so I thought I’d send out a little update on our lives at the moment.

1. We have sold our house in Austin and are moving out by August 3rd.

2. We have a contract on a house in Dublin, OH outside of Columbus. We get to move into that on or after August 10th. It needs a little work, including some painting, so we might delay the furniture arrival for a few days.

3. Alana turned 2 on Father’s Day. Grandma Marilyn was here to help watch the kids while Tim and I house hunted, so we did not get to do a party for her until this past weekend. She now has a Giggle Elmo chair – like Nicholas Lyren’s, which she enjoyed at Christmas. It seems to be cutting into her dining time as she constantly wants to get down and check on Elmo. When asked, she still says she is 1 year old. We are working on that.

4. Alana has learned to say ” ‘cuse me” in the car. (As in everytime Benton tries to talk to Mom in the front seat of the van from his seat in the way back of the van, I need to talk in a loud voice.) I told her she needs to wait her turn and say “Excuse me” when she wanted to let us know she needed a turn to talk. This means that she now hollers “cuse me” anytime anyone is talking and then when asked what she wants, pauses to come up with something to say. Unfortunately, the rest of us are finding this amusing, so we tend to giggle which is only encouraging her.

5. Alana has figured out her loud voice, but doesn’t seem to have gotten the whole whispering thing yet. I am beginning to think she has forgotten about normal talking tones as well.

6. Carson is loving camp, which is now in week 2 of 2. He managed to make a clay boat that floated with 25 beans before toppling over. He is also learning how to draw a few chinese characters and has taught me a little of what he knows. Interestingly, the symbol for volcano is the mountain and fire symbols together…….

7. Benton does not like camp, which Carson is loving, so is finding this week a LONG one already. I pick him up at noon (and Carson at 3:00), so he is getting some alone time with me while Alana naps, which is a bonus for him. He used some of his birthday money to buy Risk, the board game that takes longer than Monopoly! It also has a gazillion or so teeny, tiny pieces which Carson wants to play with and Alana is intrigued by, so finding a spot to play and leave the game set up is proving difficult. I donated the dining room table to the cause yesterday but have vowed we will eat there today.

For more details, check out the blog Tim has been posting on the http://www.secondtree.com/ website. A link is located in the first paragraph on the page. He has some pictures there. He has also posted a photo album on the webpage, in case you want to see more pictures of the kids.

Attached is one of the pictures of Alana posted in the album. She is showing off her new shoes. About 3 weeks after we got these shoes, she managed to lose one, probably fell out of the car as we were leaving a store, so now has a blue and fuschia colored pair of the same style. I suppose 1 lost shoe in 8 years of kids shoes shouldn’t be a big deal, but it still hurts to go buy a new set of the same shoes so soon after the first pair. 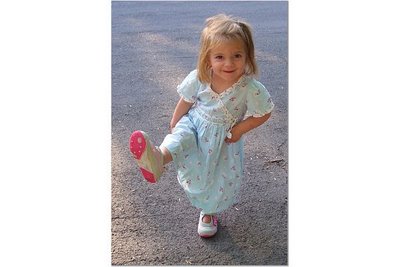