I was poking around in the web traffic data that is built into secondtree.com, and I saw that a page I posted back in September 2004 regarding US casualties in Iraq seems to continue to get traffic. One thing that shows is that I was definitely already a data geek back then. At the time — leading up to the Presidential elections — I was curious what kind of track we were on to lose as many American troops in Iraq as we lost on 9/11. I left out non-US casualties and non-military casualties just to be conservative.

After seeing the Web traffic, I got curious as to how my projections had panned out. Unfortunately, it showed what I expected. We exceeded my projections and passed the 3,000 casualty mark early in January 2007 rather than November 2007. See the chart below. 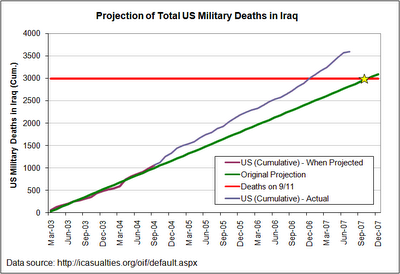 The purple line is the updated data — trending up and above my fairly simplistic projection pretty quickly.

To be clear, I’m not of the, “We should just drop everything and bail.” It’s a messy, messy, messy situation. But, there are some really smart minds who have made well-reasoned recommendations. The utter gall of the Bush administration to get the Baker-Hamilton Commission…and then pretty much ignore their recommendations is mind-boggling.