The kids got the chance to go out and search for vine-ripened tomatoes in Wadsworth. I can only hope that Alana doesn’t get confused, in that the same type of bag apparently gets used for collecting tomatoes that gets used for picking up dog poop. The same type , mind you — not the same bag!

Alana started out with an empty bag: 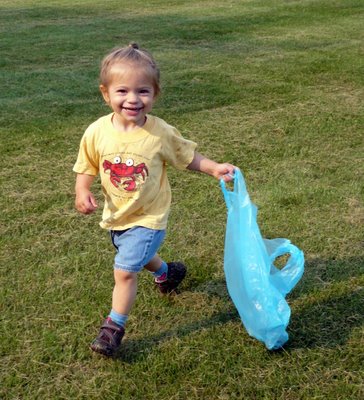 She even paused long enough for a picture with her brothers: 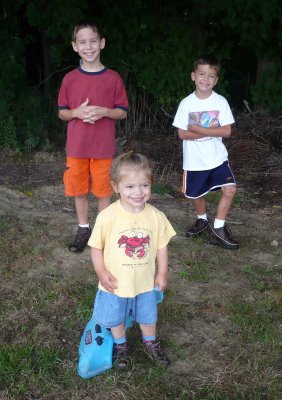 Things were a little chilly, and it took a little improvising to get her in a warmer outfit. She looks ready for Hogwarts, doesn’t she? 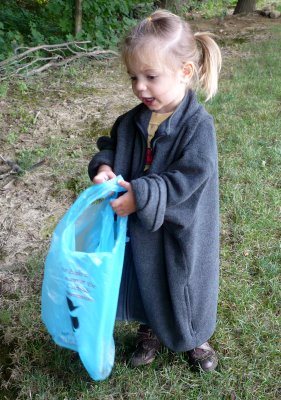 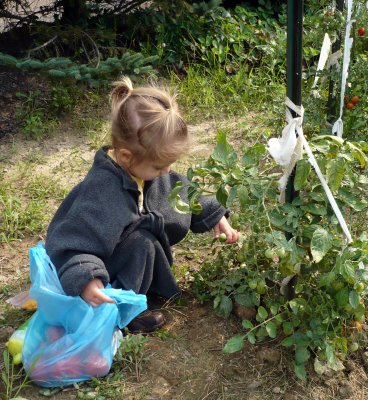 Since this post seems to be awfully Alana-centric…I’ll throw in another anecdote that I did not witness (but my editor/boss/manager has strongly suggested should be included at some point).

Julie, her mom, and Alana were out running errands of one sort or another. Alana had gotten out of the van and was heading over to the sidewalk — just out of the view of Julie and her mother. They heard her little voice exclaim, “They fell down!” Julie responded, “That’s okay. Go ahead and come over here.” Several seconds of shuffling feet on the pavement ended with Alana appearing. With her pants down around her ankles. You see, she’s very big into picking out her own outfits these days, and the fit of the clothes is not a factor in her decisions. The pants she selected were some that her Aunt Kim bought for her shortly before she left Austin — purchased with the intention that they would really get used in the winter, when long pants were needed and after Alana had grown some more. Needless to say, Alana now insists on having a belt every time she wears pants!