In my last post, I promised mention of the two main adventures of the weekend.

We’ll start with an incident that will, henceforth and forthwith, be referred to as, “When Two Rocks Collide.” The picture below is from Sunday morning, when Julie and I and the five cousins headed down to the river for some exploration. First up was revisiting the cave that Tyler, Meg, and Carson (followed by Benton and me) had “discovered” on Saturday morning when we took a non-trail from the farmhouse down to the river. This time, I was armed with some rope, as there is a very steep, very narrow, 20′ dirt slope to get up into the cave (which is really more of just a good-sized open space under some large boulders). Benton and Tyler scrambled up the slope. Alana was pitching a fit, so Julie was trying to keep her from slipping and sliding down the side of the hill below the cave. Meg scrambled up the slope, and Carson just couldn’t bear to wait until she made it all the way up (despite my admonitions). So, he was ~3 feet up when Meg was 4 or 5 feet from the top and inadvertently dislodged a rock that was a good 6 inches across. I was immediately behind Carson (ready to break anyone’s fall who came sliding down), and it looked to me like it just hit his hand. Tyler, from his vantage point above, thought it missed him entirely. So much for our eyesight. It caught him squarely in the face, as the scratches on his forehead, nose, and cheek illustrate. Needless to say, Carson lost it…but still insisted on climbing up the slope to the cave. We made it up, and his eyes seemed to be dilating/contracting fine. So, we had a blubbery, upset 10-15 minutes…but then everything turned out okay (the crawfish/minnow hunting mentioned in the previous post followed this incident and lasted for a good hour or so). 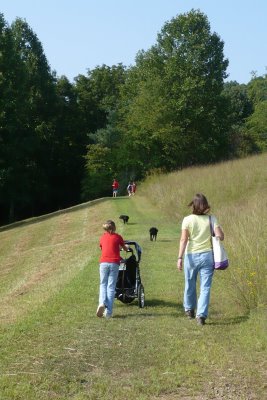 As for the second adventure, it had to do with the tractor and the brush hog. Bob is at least a month behind mowing the 100-200 acres of his farm that he mows each year. Various mechanical problems, combined with various family commitments (not the least of them being our arrival in Ohio), have put him way behind schedule. He got a late start on Saturday, but spent the better part of the day mowing. He was having some difficulties, in that the tractor was running a little hot. He tinkered with it quite a bit, but couldn’t find an obvious culprit. All it took was putting his son-in-law on it for an hour-and-a-half on Sunday afternoon…and it threw a rod. I’m pretty sure it was just bad timing on my part. I realized it was overheating — not yet into the red zone on the temperature gauge, but steadily climbing that way and not coming down as I kept raising the mower blade. I shut the tractor down and hoofed it a mile-and-a-half back to the farmhouse. The real adventure came when Bob and I pulled the tractor back behind his truck. Well, on the uphill sections, I was on the tractor and being pulled behind his truck. For the downhills, of which there are several that are long and relatively steep, we unhitched and I got to play rodeo with the tractor in neutral. As Julie commented later, she was glad to only witness the last part of that endeavor, and to have no prior knowledge of it! 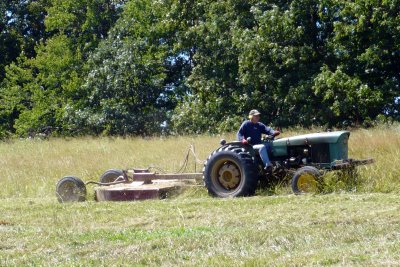 No more real adventures, but we did string up a nice hammock that Bob picked up from one of his customers. It’s a big hammock, with plenty of room for Alana AND Carson with no significant squabbling. 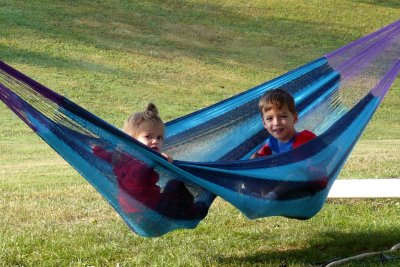 And it wouldn’t be the farm without the 4-wheelers. The nicer one is undergoing repairs, and there was some griping on Benton’s part because he is not allowed to drive around the yard by the farmhouse by himself like Tyler and Meg can. Benton, of course, will be there soon enough, as he remains our extremely coordinated, extremely risk averse child. Carson, shown below, may never be allowed to actually drive unassisted (he has the coordination, but the common sense may never come)! This picture is atop “the High Point,” where Carson and I headed on Monday morning. He controls the throttle off and on, but is far from driving solo. Julie and I actually had a “date night” on the high point on Saturday night. After dinner, Pam watched the kids while we drove over to this grassy knoll and hung out for 10-15 minutes before driving back. ‘Twas nice! 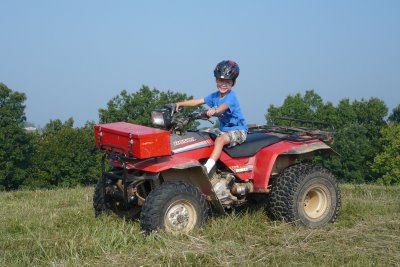 Yet more pictures to come…but not tonight!