The Dogs Have ALMOST Recovered

Elwyn’s an old man. He’s outlived any of Julie’s previous dogs by half a decade, and we all know that Julie hasn’t had a dog that wasn’t in the 99th percentile when it comes to coddling and TLC. Starting in April or so, as Elwyn continued to wheeze loudly when he was hot, excited, or woke up on a day that ended in “y,” Julie started making comments about how, if he could just last long enough to make it to the farm one more time, then she would be okay with him passing on to that great milkbone factory in the sky.

He survived a week relatively untended during the day in Austin (when I was at work and my parents were in Nevada). He survived the drive to Ohio. It seemed a little touch-and-go as to whether he would survive the drive to West Virginia over Labor Day weekend, as he seemed to know where he was going and was so excited that he got himself pretty worked up every time we slowed below 60 mph.

Luckily, he made it. On Saturday, he even made it down to the river for a swim. Actually, just as Abbey’s vice was food — we were pretty sure that, given an open bag of dogfood, she would overengorge herself Se7en-style — Elwyn’s irresistible urge is swimming. As Tyler, Benton, and I skipped rocks, Elwyn kept trying to retrieve them. And, let me tell you, there are a lot of good skipping rocks in West Virginia, so he was heading out quite a ways. Occasionally, we’d throw him a stick, and he’d get it…then swim back looking (and sounding) like an oversized, asthmatic otter.

Eventually, I headed back up to the farmhouse. We stopped a couple of times on the walk back up the main hill to give him a breather, but, overall, he did fine. This picture was actually taken about 50 yards from the farmhouse on that trek: 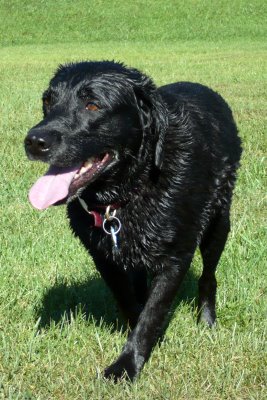 Molly, for her part, demonstrated an affinity for being near — but not in (beyond her ankles) the water. As we’ve known for years, she looks to be 75% lab, but she’s 75% terrier at heart. She also might be 25% mountain goat, as she scaled a few relatively sheer dropoffs multiple times. She spent a lot more time running around on land than Elwyn did. By Saturday afternoon, both dogs were doing a lot of lounging around…unless something like a deer wandered by. 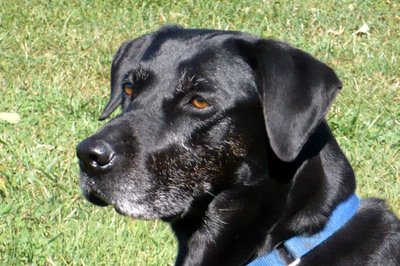 Both dogs were obviously very stiff and sore by Sunday morning. And I realized that one dog’s nose is dry and cracked.  But, they both gamely headed back down to the river. Elwyn is still a “rock-diving” dog, in that he’ll retrieve softball-sized (and larger) rocks from the bottom of 18-24″ of water. I have some pictures of those, too, but they’re really kind of dull. If anything, Elwyn’s endurance was better on Sunday than it had been on Saturday.

Below is my stock “river shot” on the farm — I take this basic picture every time we go, and it’s interesting to see the differences based on the time of day and the season. This is the first time I took the shot with a canine in the picture. 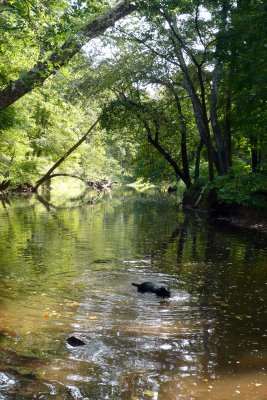 Both dogs have done a lot of laying around this week at home, and both are still obviously a little sore. But, they’d go back in a heartbeat. As would the kids. As we will!