I am my father’s child when it comes to tree trimming and pruning. When my dad helped me trim trees behind our house several years ago, I apparently was not cutting the trees back far enough. He taught me to use the “5 year” pruning plan so I wouldn’t have to come back again next year to trim it again. I bought into that concept and learned to enjoy hacking away at trees and shrubs.

Today, I took care of a “little” pruning that was needed at our home in Ohio. In addition to removing a few low hanging branches that were too close to the cars, I decided to take out a very prominent bush by the driveway. It was blocking my view of the porch and blocking my view of the kids in the driveway when I was on the porch. It also got in my way whenever I would attempt to park next to it, so it needed to get drastically “trimmed”. It may not survive and grow back, but I figure it can be replaced with something more suitable if I managed to kill it, which I just might have done.

Tim, however, is a little concerned. You see, four years ago, when we moved into our previous house, we had a very prominent, rather nice looking holly bush in the front of the house. It is that large green thing in front of the window. 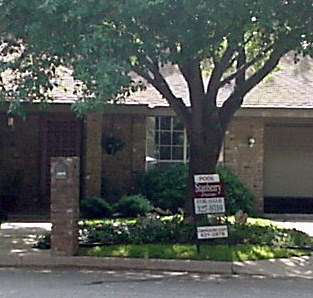 After trying to dig Benton’s soccer ball out from underneath the bush’s very poky leaves, I decided that this plant was not appropriate for a family with active children. So, it had to go. It took a bit to remove it, including breaking a chain on my father-in-laws truck, but finally it was history. I placated Tim when he saw the vacant garden area with an assurance that I would plant something nice there. After discovering that the water on the roof ran directly into this area, there was no point in planting flowers unless we added gutters, which we never did. So, four years after killing the bush, there remained an unattractive muddy patch of earth, best used for mud baths. 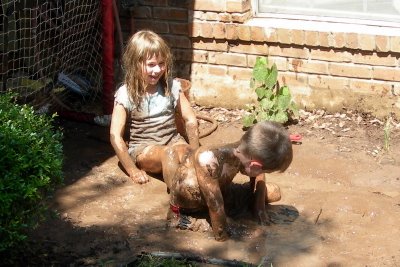 Should the stump that remains after today’s pruning not grow again, time will tell whether my plan to just “add some flowers” to this patch of earth will pan out. I really like to hack away at overgrown plants and trees and cut them back, but I am not really great about planting and growing new things. I suspect Tim has good reason to be concerned.