Versatility Is the Key

Julie headed out this afternoon to run several errands. The kids and I settled in to watch the OSU-Michigan game (Go Buckeyes!). It turns out that only Carson has a football attention span anywhere near long enough to watch an entire football game. Alana was playing with Legos in the family room, and I asked her if she wanted to go upstairs for rest time. She immediately responded, “Yes.” That took me by surprise. But, I told her to go ahead and head upstairs. She departed…with no escort. Benton and I headed outside to make a fire with which we could burn off a bunch of junk firewood that the previous owners of our home left (they left a bunch of good stuff, too!). An hour or so later, I came in and hollered up to Alana that her rest time could be over. No response. I headed back outside. After another 45 minutes or so, I came back in. This time, I wandered upstairs to check on her. Things were awfully quiet, which is not normal for her rest times!

Backing up a little bit, Alana’s room has two beds currently: her crib (which she now gets out of on her own) and her four-poster/canopy bed (which was Julie’s as a child). The picture below shows part of the crib on the left and part of the bed in the main part of the picture: 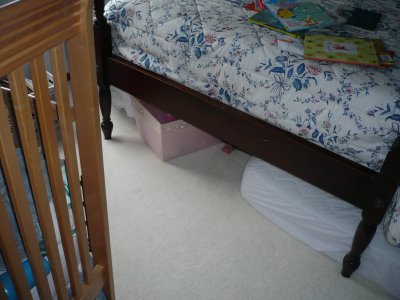 Look at that picture again. What I was really taking a picture of is that little hand that you can see right in the middle of the picture. Did you notice it the first time?

That’s where I found Alana. Zonked out completely — to the point that she was oblivious to close-in flash photography: 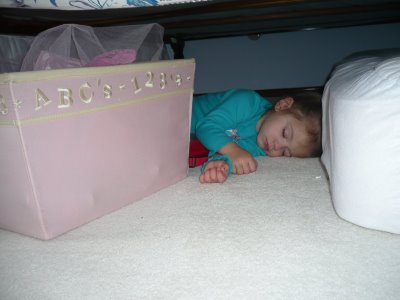 I left her there, and she had a pretty good, long snooze. This gave Benton and me enough time to not only get a nice fire going, but to split a lot of the good wood and stack it up for inside-fire use, and also to make some dinner rolls from scratch, half of which we cooked up in a Dutch oven on coals from the fire. Yummy!

This cool weather ain’t bad at all!