When we arrived Thursday late afternoon, the temperature was hovering around 20 degrees. I got everything turned on, and we thought we were in good shape. It wasn’t until after dark that we realized that there was no hot water — although the gas was on, it had really low pressure, which was enough to turn on the flames on the water heater (it’s a tankless system — when you turn on hot water in the house, the flames come on in the heater and it heats the water as it passes from the pump to the faucets), but not enough to turn them on high enough to actually heat the water. Fortunately, Bob had shown me where “they occasionally shut off the flow of gas to the house to build up pressure on the one well — happens maybe once a year” (there are two gas wells that he’s tapped off of, and one of them was open to the house, but the other was not). Unfortunately, I wasn’t paying quite as much attention as I should have when he showed me which well that was. The only ATV available was the older one, which is 2-wheel drive and not all that great on the snow. Nonetheless, I headed out to see if the well had indeed been closed off. I overshot the turnoff to the well I needed to go to and went to a different well. THAT didn’t look familiar! I backtracked, got stuck a couple of times, but ultimately found the well, turned it on, and we were in business. Well. Sort of. It was too late for the heater to catch up with the dropping temperatures, so we didn’t top 65 degrees in the farmhouse that night!

The forecast was for the weather to warm up into the 40s by late Friday (it wound up being more like Saturday), so both boys headed out in the dark on Thursday night to satiate their need for speed. And, on Friday, we were surprised by the arrival of their cousins, who stayed for the weekend.

There was sledding on various hills (below are the second set of hills they hit — that’s Uncle Brett at the top of the hill about to take a brief spin as a “kid” before heading back home): 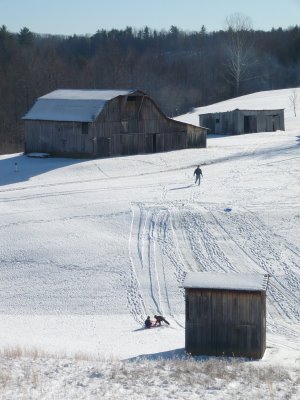 I swear Benton would spend more time describing what he’d done or was going to do than he would actually doing something if there was an adult within a half-mile: 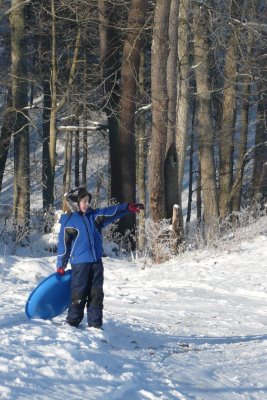 I learned to both keep my distance and to heavily advocate for the light saucers, lest I be comandeered as the equipment lift: 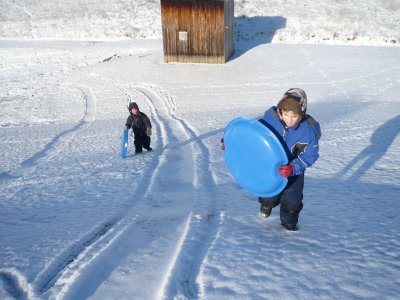 And even Alana got into the action. This quickly progressed from me pulling her up/down some gentle slopes to me running down some steeper slopes trying to keep up with her and hoping like crazy that I didn’t break a limb. 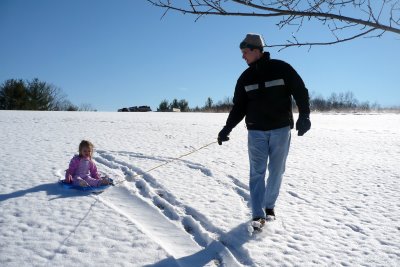