And the Tetherball Woes Continue…

I’ve written a number of posts on The Saga of the Tetherball. The good news — the only good news — is that we’ve recovered the camera that had pictures of Boppa and Benton playing tetherball in sub-20 degree (Fahrenheit) weather: 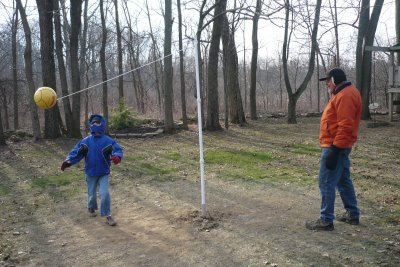 The bad news is that we aren’t the only people who have taken pictures of the tetherball rig in our backyard. The Homeowners’ Association has as well (albeit without anyone playing a game at the time). We received a notice this week asking if we’d gotten approval to put this up, as they do not have a record of it. Well. Um. That’s because we didn’t realize it would require approval.The good news is that it is semi-removable. With a shovel, a screw driver, and weather in the 40s, I could have it out in 15 or 20 minutes. Julie thinks we’re just going to have to paint it to match the house (painted plastic where a rope constantly rubs across the surface — that’s going to look really nice by the third game, I can imagine!). We’ll see. She called today, and we’re getting the paperwork submitted. We’ll find out. As my luck has gone with this whole experience, I’m expecting that I’m not only going to have to remove it, but I’m going to have to re-sod the 12′ ice/mud pit that surrounds it!