The Hideout Is ALIVE!!!

Way back when we were still living in Austin but had a contract on our house in Ohio, I floated the idea with the boys about how the basement was big enough that we could probably build a little hideout in one corner. Benton, especially, was pretty keen on the idea, and he asked every week or two after we moved in as to when we would get started. He and I played around with some ideas for the location, sizing, and design a bit, and I got a good enough idea as to what we had in mind that I could load up a bunch of OSB and 2x4s from Bob’s farm when I drove down the weekend before Christmas.

At the time, Julie was still thinking that replacing the carpet in the basement was an imminent task, so I held Benton off by telling him that we did not want to start until after the new carpet was down. Well, several weeks ago, Julie announced that new basement carpet is not a near-term goal after all. So, when Julie took Carson and Alana to a birthday party last weekend, Benton and I got busy in the garage building the second floor for the hideout and cutting out the wall pieces. The design we ultimately came up with is 3′-6″ wide, 8′-1″ long and 6′-9″ tall. It bisects the basement — separating the TV/bar/couch area from the pool table / air hockey area.

Today, Julie took Carson and Alana to a Disney on Ice production (I’ll let her provide an update on that experience), while Benton and I headed to the basement to continue the project. We started by assembling the wall with the main door in it (it’s a bisected pentagon — Benton’s design). The structure leaning up in the background is the second floor, with the opening framed in one end for passage between the two floors. Benton’s really getting the hang of using the cordless drill to drive in screws. 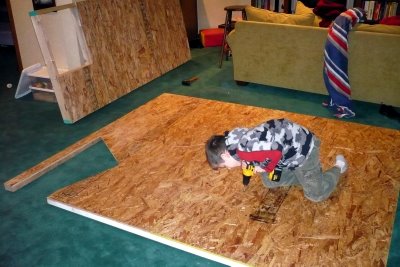 We then assembled the second long wall, which has a quarter-circle “secret exit” (hinged door to be added later) that comes out between the wall and the couch. It took a bit of help from Julie to get the walls standing up and secured with cross-pieces, but the floor then simply slid into one end before it was closed it up. Carson was the first kid to test out the structural integrity (that end, ultimately, will be fully enclosed, and a ceiling will be added to the top): 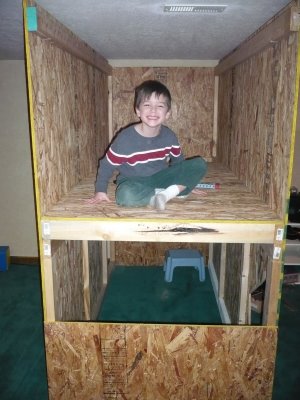 All three kids then got up on the second floor to try it out (if you click on the image to view the larger version, you just might be able to make out Benton’s braces): 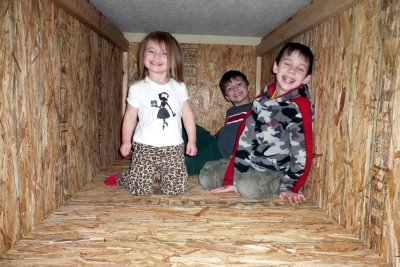 And Alana tried out the secret exit before we pushed the couch back over. 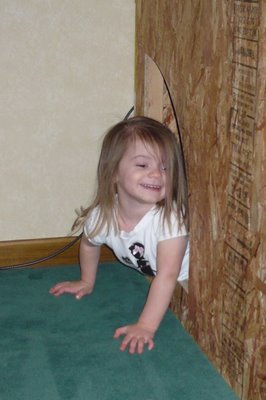 It’s far from done. The plan is to carpet all surfaces on the interior, as well as to paint the exterior. One long wall will get cork added and a dartboard hung on it. The hideout butts up to an electrical outlet, so there is a hole on that end of the structure to allow easy running of lights to both floors. And, we need to add a ladder or steps to make passage from the first floor to the second easier than it currently is.

So, plenty of work left to do, but I’m tickled that we got it to this point before I head into a crazy four weeks of travel when I won’t have much time to work on it. And, better yet, the total expenditure for the project has been $0.00 thus far. I’m sure we’ll wind up putting some money into it to get all the finishing done, but we’ve definitely seen the advantages of living a few hours away from my I-never-get-rid-of-anything-because-someone-might-need-it father-in-law!