An Engineer in the Making

One of the favorite XY-chromosome weekend activities in our neighborhood (all the adult men plus Benton) is to grab some glow-in-the-dark golf balls and walk down the street to “Smuirfield,” which is a set of six greens with flagsticks on semi-sculpted terrain that was set up 25 years ago by a couple of local residents and has been maintained ever since: 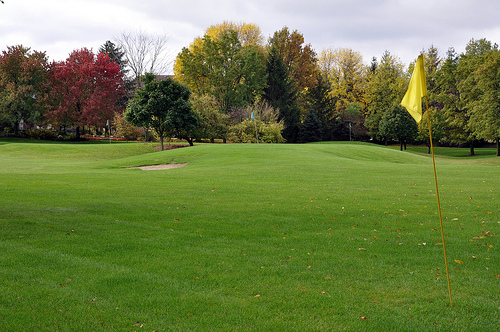 It’s a fun place to go during the day, but even more fun at night! If we have three or more players, the game goes something like this:

It’s a simple system — you lose a hole, you walk. Sound like fun? Become a fan of our Facebook page!

The headlamp is imperfect. It doesn’t really fit on top of the pin all that well, and if the pin swings or the headlamp slips, it can be tough to see from the tee. And, the headlamp that works the best is my nice headlamp, and I’m convinced it’s going to get lost or whacked with a golf ball sooner or later.

We’ve all kicked around various ideas for a better lighting solution, but we didn’t have anything concrete. When I saw a set of flashlights at Lowe’s for $7 (batteries included) that included three 9-LED cylindrical flashlights, I had to grab it! The basic flashlight: 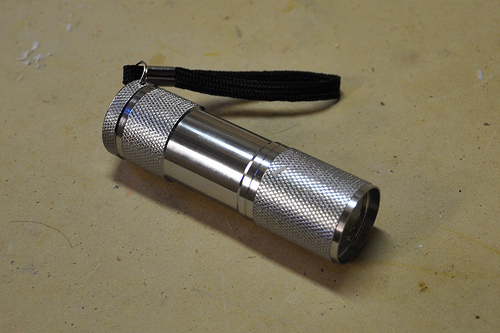 Benton and I managed to pop the lens out and then pop out the little board that held the LEDs. We then used a soldering iron to remove all of the LEDs from the board and solder 1.5″ wire leads onto them, which we then soldered back into the board. We then popped the board back into the flashlight and epoxied the whole mechanism onto the end of a piece of PVC pipe, We had our first prototype: 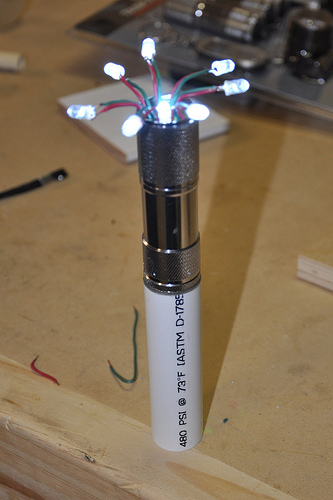 We headed down to Smuirfield one evening to try it out and…found a major design flaw. The PVC pipe we used was too small to fit over the framework that held the flag in place. But, we confirmed that it was plenty bright for the task.

Back in the workshop, we grabbed a piece of PVC with a larger diameter (“What’s with all the PVC lying around your workshop?” you might ask. They’re remnants of our past experimentation with making a marshmallow shooter using spud gun principles). We drilled six holes in the PVC for screws that would hold the flashlight in place (this was Benton’s idea; he couldn’t remember where he got it, but then he saw our Christmas tree stand today and suddenly said, “That’s it! That’s what I was thinking of!” It’s basically two sets of three screws that are all pointing inward to hold the flashlight in place). Another set of holes around the top were drilled for the LEDs. 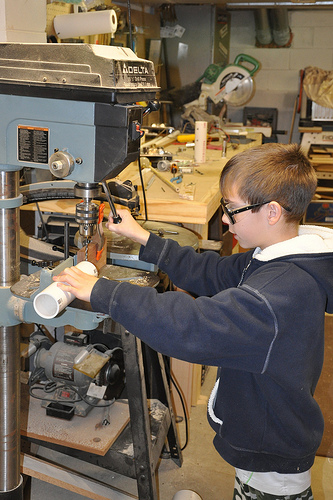 We put the whole assembly together, and it looked pretty good: 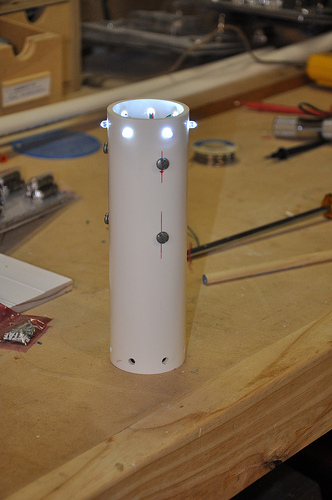 I even convinced Benton to model the finished product (it sits straighter when there’s an actual flag on the top of the flagstick): 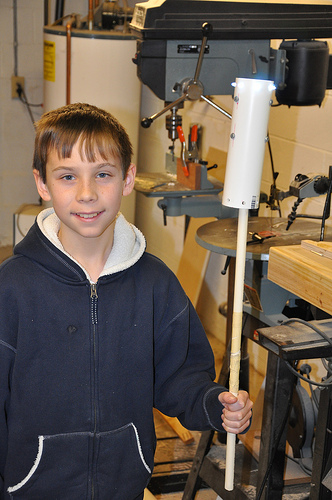 We took it down to try it out, and it works great! Plenty bright, the flagstick is used to turn the light on (the pushbutton for the flashlight is up inside the tube). Overall, it’s pretty slick. We need to make at least one more to improve the speed of the game, but we’ve talked about making three or four, as well as tracking down colored LEDs for different ones so that we could play the “red” hole or the “white” hole or the “green” hole (Benton actually experimented with coloring and painting a white LED, but the results were mixed at best). Benton will be a master solderer by spring!

One Response to “An Engineer in the Making”