Benton Catches Up with an Old Friend

Blog post inconsistency of late has been driven entirely by a busy, busy travel schedule — in a two-week period, I was in the Great Smoky Mountains, New York City, and Austin, and all of those were multi-night stays! I do have some share-worthy pictures that I’ll get rolled out into posts over the next week or so (I hope).

I’ll start with the last trip, which was a 4-day weekend trip that Benton and I made to Austin. The timing of the trip was driven by a Texas Longhorn baseball series against the Kansas Jayhawks, but we managed to pack in quite a bit of visiting and activity with friends and family along the way.

The first game of the series was on Friday evening, and we went 2.5 hours early with Bob and Jack Herbert so we could do some proper tailgating. Bob brought along his grill and made buffalo wings on-site, which is not a bad way at all to warm up for a game.

Benton and Jack have gotten together a few times since we moved to Ohio — both in Ohio and in Texas — and they remain a very compatible pair. At their urging, we gave them their tickets shortly after we arrived at the stadium and told them to just stay together and check back in with us occasionally.

As they were heading off to roam the stadium and take in some BP: 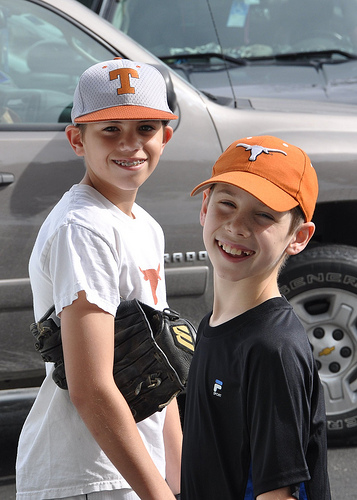 They did pause long enough to show some Longhorn pride: 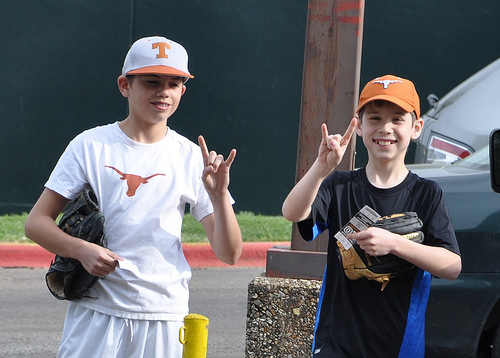 When Bob and I headed into the stadium in the first inning, we almost tripped over Benton and Jack. They’d snagged a snow cone and a funnel cake and plopped down in convenient seats to watch some of the game. Their tickets were for seats that are in this picture…wayyyy off in the distance over Jack’s right shoulder! 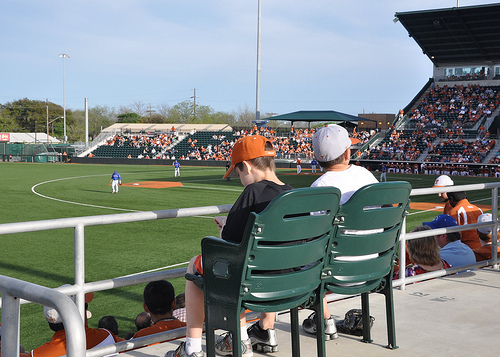 One of the (many) beauties of college baseball is that, even in one of the most highly-attended stadiums in the country for the sport, it’s still pretty intimate. At one point, Bob pointed across the field to where Benton and Jack were watching the game from the grassy berm (they’re in color in dead center of the photo below): 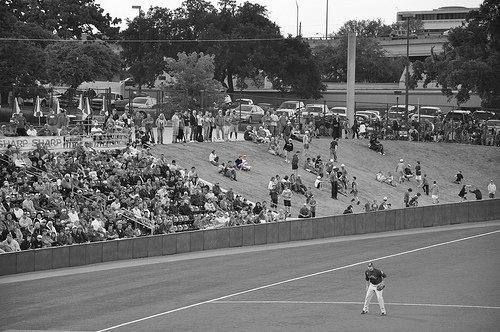 I hadn’t yet gotten my glasses, so I could only find them — barely — with the aid of the zoom on my camera.

Benton had gotten up at 5:15 AM that morning for us to catch our flight to Austin, and he’d been up late packing for the trip. By the time the game was over, we’d packed up the tailgate, had swung back by the Herberts’ to pick up our car, and had made it back to my folks’ house in Dripping Springs, it was 12:15 AM Eastern time. Benton slept for the next 11 hours!