The Evolution of a Mom’s Attitude

There was a time in the Wilson Household when there was a sufficiently strong “don’t get our kids thinking about guns” mentality that even water pistols were dubbed “water squirters.” There was even a strong preference to find water squirters that were as non-gun-like as possible in appearance. 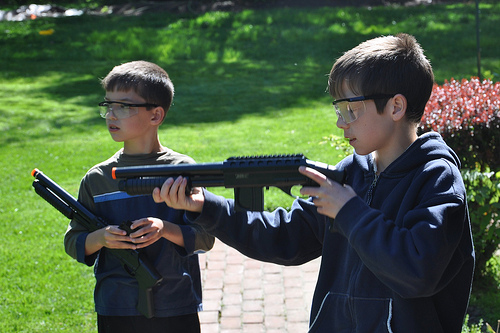 The owner of these guns is in the foreground — the firstborn of the the “water squirter” enforcer reference above. In the background is his younger brother.

They were just shooting plastic BBs at a target in the backyard in the photo above. The preferred activity is to get 4-6 kids playing capture-the-flag in the woods behind our house.

I had Benton shoot me in the back from ~30′ away the night that he got these. It was dark and it was windy, and he’d only had them for a couple of hours, so I figured he’d miss.

Even lightweight pellets sting a bit, even through denim.

One Response to “The Evolution of a Mom’s Attitude”