We decided somewhat spur-of-the-moment on Friday to make an overnight trip out of town. Initially, we were going to head to Cincinnati, but, after some consultation with a neighbor, decided to head an hour-and-half to Dayton instead to visit the National Museam of the U.S. Air Force. On our way out of town, we headed to the Center Of Science and Industry (COSI) in downtown Columbus. I had never been, but we’ve got a family membership, and the Sesame Street/Elmo-themed “About your Body” exhibit was winding down, so we figured it would be a good stop.

Apparently, most of the families in the greater Columbus metropolitan area had the same idea. It was a madhouse, and Benton, who was none too pleased that we were heading out of town in the first place, was triply unhappy about hitting COSI and a Sesame Street exhibit. Alana had a good time…but she is still asking when she’s going to see Elmo. Frankly, the exhibit was pretty disappointing.

Alana spent some time dancing in front of a big screen where Grover took anyone who was watching (most of the time, there was no one watching, despite the crowd overall) through some moves. By this point, Benton was on the verge of having his head bitten of by Julie for incessantly and whiningly asking, “When are we going to leave?” He’d (wisely) headed off to a nearby pole and decided to just stare at to express his displeasure. Carson is in the background fiddling around with another exhibit. 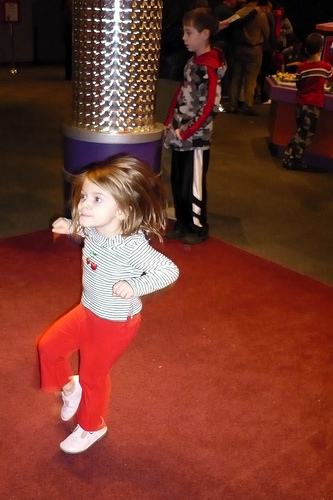 Things really got better after that. We spent an hour or so on Friday afternoon at the Air Force Museum, and then returned for a couple of hours on Saturday morning before heading back home. It is an exceptionally well done place, and both Benton and Carson had a ball (and Alana didn’t seem to mind, especially once she brought her baby doll on the second day and could show her around). Carson took ~200 pictures…but we’ll cover that in a future blog post.

One Response to “Family Adventure — Starting at COSI”