As promised in an earlier entry, here’s a recap of our trip to the National Museum of the USAF. We split the visit over two days — arriving on Friday afternoon and walking around until it closed, and then going back on Saturday morning for a couple of hours. The overall layout and the exhibits are exceptionally well done, ranging across three large hangars and organized roughly by relevant period in aviation history. There are hundreds of planes on display — from full-sized replicas to actual planes that have been retired from service. There is a full-scale replica of the first plane purchased by the military, which was put together largely with wood and finishing nails. It never really crossed my mind that the early years of the aviation industry were equally driven by skilled woodworking as they were driven by the development of the internal combustion engine. There is Orville Wright’s 1916 wind tunnel that is a beautiful work of laminated wood. There was a much larger version of the same design later in the exhibit. MIT’s wind tunnel is actually named the Wright Brothers Wind Tunnel. That one, of course, is the more modern design of a continuous loop, rather than a straight shot.

At the other end of the timeline, the museum has a B-52 bomber that you can walk under and look up into the bomb bays, and both a B-2 stealth bomber and an F-117 Nighthawk stealth fighter. And, as I’ve already mentioned, hundreds of other planes on the ground, suspended overhead, and even partially deconstructed to provide a good view of the inner workings.

A good friend of ours in Texas has a large, wooden propeller from an old biplane, and we called him to see where he’d gotten in his research. His best information to date is that it’s the back propeller from a Curtiss NC-4. There wasn’t an actual NC-4 on display (although there was an earlier but similar plane, based on his description — the Ca. 36 — on display), but there was a model of one in a display case that has a hundred or so model planes (look carefully and you can see the fourth propeller behind the wings in the photo: 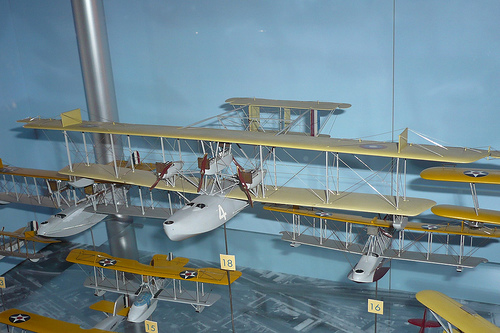 Carson, Benton, and I rode in a simulator that was interesting if a bit underwhelming. Carson manned the camera and took over 200 pictures, largely to show to a friend of his who is very into planes. 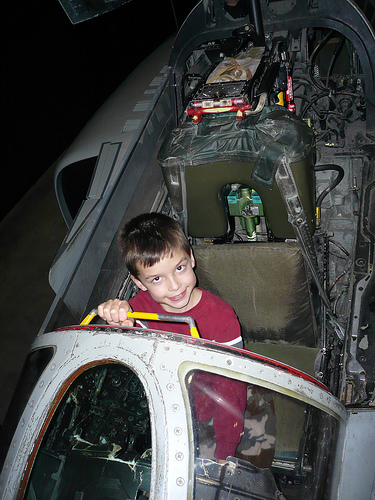 Unfortunately, we apparently never told Carson that he needs to push the shutter down halfway and wait for the camera to focus before actually taking the picture! He culled down the pictures…to 121…before we posted them on Flickr. If you’re looking to kill an hour, they’re available here.

At one point, as Benton and I were looking at jet engine that had had it’s skin removed so you could look inside, I reminded Benton that his great-uncle-in-law Don worked for Pratt & Whitney for years. I was focussing on him remembering who Uncle Don is, as he’s met him several times. Silly me. Benton’s response: “I thought Uncle Don worked for Rolls-Royce.” Oh. Yeah. You’re right, Benton. I mumbled something about joint ventures between the two companies and moved us on along to look at the U-2.

I suspect we’ll head back, as it’s close and it’s free (I’m sure taxpayer dollars are involved, but it looks like the museum is heavily supported by a private non-profit foundation which raises money from the private sector). Definitely a field trip with the male Herberts when they make a visit from Austin. Maybe we’ll figure out a way to head there with Uncle Don at some point. Who knows?

One Response to “National Museum of the United States Air Force”